CATCHING UP WITH AVON HYDE 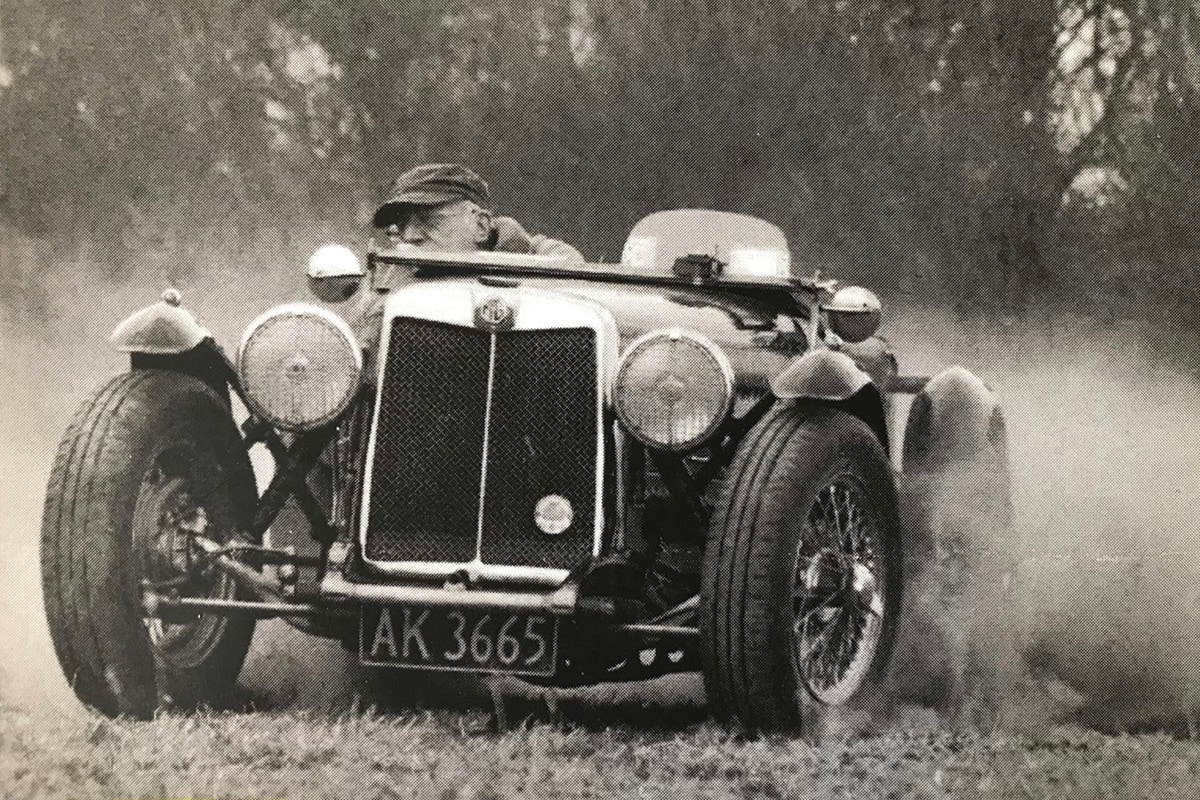 Trialling in his Austin 7.

Avon Hyde officially retired from competitive motor racing in 1993 after a career that contained several highlights in so many categories. But what did retirement really mean for Avon?

Initially, sparked by his last truck race, Avon believed his nerve was starting to disappear – but his attitude changed only a few months later when his long-time backer, Clyde Collins, built up a Pontiac Firebird for an Open Saloon Car Association (OSCA) event and wanted Avon to drive.
That drive would be a one-off thing but was nevertheless successful, taking place at the opening of the new Ruapuna circuit in November 1993. Avon won first time up following a thrilling dice with Brett Willis.
Since then, much has been written and spoken about Avon’s obvious talent and successes, none more so than in NZ Classic Driver, with an article printed back in 2013 and written by Tony Haycock. That feature presented a comprehensive look at Avon’s motorsport career. Over the years Allan Dick has also lent his thoughts to his racing exploits and often made comments along the lines that Avon’s talent was never truly recognised, statements that often embarrassed him.

Racing ambition
Avon won many championships but, apart from three national trucking titles, all were regional. These included OSCA and the South Island Mini 7. He also raced three times in the Wellington Street Race during the late 1980s in a BMW 635CSi. He had a noteworthy result in the 1986 running of the street race, with national Ford Escort champion Allan Milligan along as co-driver, finishing sixth in a field of 46 – with only 14 finishing! As an interesting aside, five days before the meeting Avon and Milligan’s entry had yet to be confirmed.
Chasing national championships was never part of any racing ambition and when his brief flirtation with the 1993 OSCA drive at Ruapuna ended, Avon’s focus returned to family and business commitments. Family always came first with Avon and they would accompany him to all his race meetings. His wife Marg was a huge part of this and would handle all the tasks necessary to keep everyone happy. Sadly, she passed away last year, leaving a huge hole in Avon’s life.

“Marg never missed an event. She was always happy to support my racing. I never made her come along,” he said when I caught up with him recently for a cuppa and a chat. “She never worried about Chris [their son] or me racing and always had faith in our ability I guess. She didn’t like me doing speedway or super karts. [He did one season in a midget at the Ruapuna Speedway.] She knew though to stay out of my way if I had a bad day.”
Family days at motor racing events invariably involved Clyde Collins (an OSCA champion during the early years of the series).
“Marg got on well with his wife Jan, which all helped make for a good day out.
“Marg was really amazing in the trust she had for my driving. She lived in Kaikoura when I first met her and was the only person who would go to Christchurch and back with me in the A30 I had. I think others thought I was mad.”

Vintage Trials
Motorsport and cars remain part of Avon’s life, and his interest in older cars, brought about during his active days with the Vintage Car Club, along with support of his son Chris with his racing and driving school, are all positive factors for him to focus on.
His time with the Vintage Car Club saw him compete in competition trials at the wheel of an Austin 7. These for the most part were off-road competitions and nothing like the high-speed racetrack events he was used to. However, the Vintage Car Club’s contribution to classic meetings in the South Island was an important cog in the structure of these events.
Racing a beautifully prepared purpose-built Austin 7 (not the car he had previously used for trials), Avon quickly showed why he had been so successful in the more serious categories. Powered by a 1000cc Austin engine, in Avon’s hands the little car not surprisingly mixed in with most of the gruntier cars in the field.
His attention to detail was apparent. Apart from his obvious driving ability, nothing was left to chance with the car’s racing trim.
“It was a wee honey, but nothing fancy,” he added.
The car had been built on an Austin 10 chassis with leaf springs that normally would go under the differential, but Avon reversed this arrangement – with two rails going over the front axle and springs going over the back axle. The engine came out of parts from a shed at the Vintage Car Club premises on McLeans Island (at the back of Christchurch airport). He paid only $15 for this engine. Long time Mini 7 supporter Larry Mulholland, from BMC Transmissions, gave him the pistons, ones that Avon described as “beautiful”. Larry also supplied a new head to the engine, which also featured a lightened fly-wheel.

Final Race
Now well into his 70s and having been involved in classic racing since his retirement from competitive racing in 1993, Avon’s racing days finally came to an abrupt end on day one of the 2014 SKOPE Classic – although he still regularly competes in vintage trials. The timing of his announcement came as something of a shock to all.
“A couple of the faster cars passed me near the end of the back strait. Braking on the little car was a bit slow, and going into the braking zone they squeezed me and we clipped wheels. This knock flipped me a few feet in the air. That did scare me and I knew that was it. And it was, I have not raced since.”

During his time with the Vintage Car programme, son Chris made his mark on the national scene when he won a Formula 5000 Tasman Revival series. After a start in karting, he sprang into prominence at the age of only 16 in the South Island Formula Ford championship. Driving a GLH, a car that was the same age as Chris, he quickly demonstrated a talent that bore many similarities to his father.
The GLH was one of two built in 1973 by Gerry Hones (a former Brabham engineer), along with the well-known brothers, Lloyd and Hugh Owen.
Clearly, Avon’s advice also helped Chris carve out a career that could have, and probably should have, gone a lot further. This all poses an obvious question of what exactly did Avon offer during those years?
According to Avon, nothing!
“In all Chris’s racing I never said much. He really out-drove the GLH. The first time he drove a racing car was at a fun day at Ruapuna, I arrived and there he was out there racing and leading. He went on to win the 1986 South Island championship with the GLH.
“I never taught him, maybe a few tips. He used to watch me heel-and-toe and this was something he did pick up. But kids never listen anyway!”
Not surprisingly, Chris has a different take on this. Today, Chris has also retired from racing but runs the Canterbury Racing School and V8 SuperDrive from Ruapuna Park. Chris can claim some kind of a record in that he has completed in excess of 100,000 laps around the 3.44km track.
Prior to this, Chris worked for John Crawford who ran the racing school and race preparation workshop. The job also included testing customers’ Formula 5000s. He also maintained the Stewart family’s stable of race and roadgoing cars. It was from these connections that Alistair Hey asked him to race his McRae GM1 in the Tasman Revival series, this offer eventuating after Alistair had witnessed Chris put in quicker laps than the instructors during an Audi invitational day at the racetrack.
His subsequent success in the GM1, along with the considerably publicised exploits with the GLH, certainly prompted me to ask what Chris had learnt from his father.
“Dad was my hero, even in my karting days. He was always good at his racing and I always watched. I therefore tried to apply what I could – heel-and-toe control was one of those things,” he explained.
“I remember him saying to me at Wigram one day – probably in December 1984 – that I should watch Davy Jones, an American Formula Atlantic driver. We were sitting on the deck of a truck and he repeated time and time again that I needed to watch Davy’s braking, set up and exit lines. He was always saying, ‘Watch the better guys,’ and I tell my students that even today.
“When Alistair asked me to drive the McRae in Australia, my only condition was that my dad came too. The best part of that campaign was hanging out with him, just travelling and working with him. It was one of the best things of my life.” The races in Australia were part of the Tasman Revival series that Chris won.
“The GLH probably should never have got some of the results with me. It was old, but Dad was the one that made it so much better. He set it up and I used to see him with matchboxes and pieces of string, it seemed the most ridiculous way to set up a car but he knew what he was doing. The car was perfect. He also bought it for me, I really don’t know how he could afford it at the time.”
Advancing his racing career, Chris’s mindset was similar to that of his father.
“I saw Craig Baird advance but he obviously had a budget. I would love to have gone to England, but Dad never encouraged me. I didn’t really have the confidence anyway. I was just happy to be there and hang out with my mates.”
The racing legacy of Avon Hyde and his family lives on.