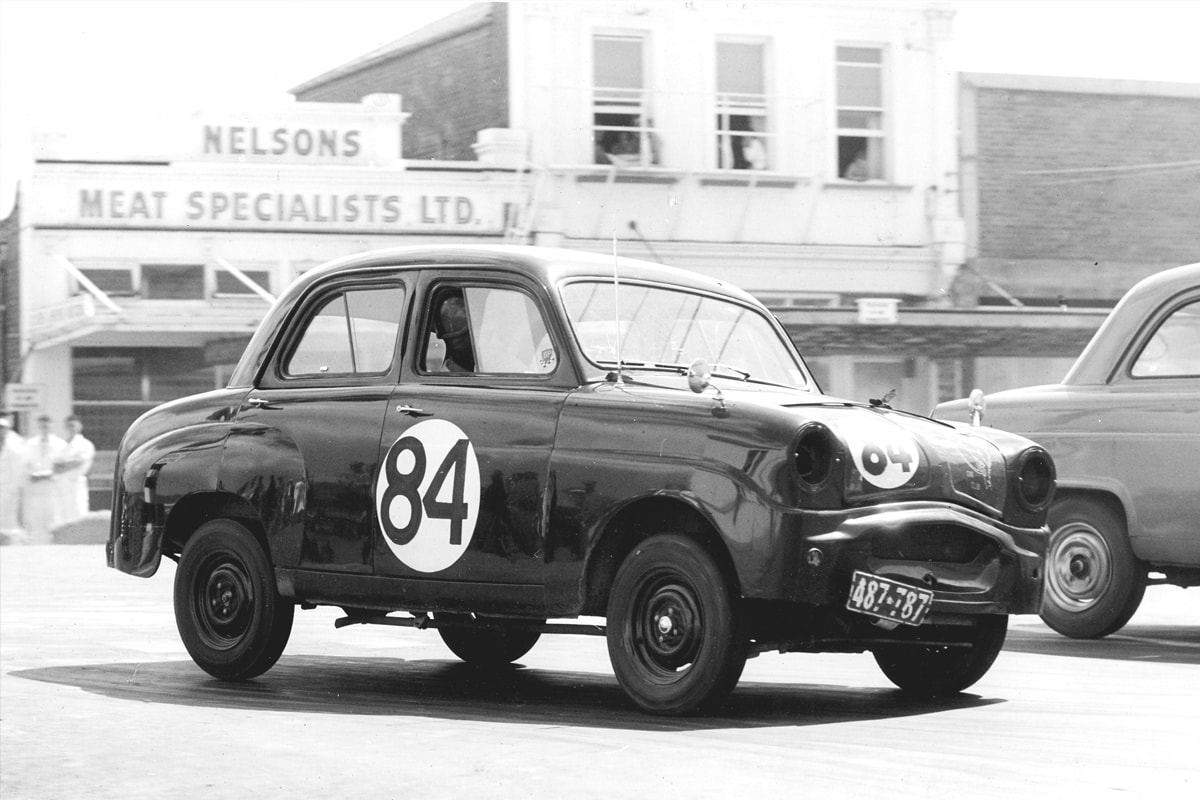 Season finale – Cliff Knight in his Standard ‘Ten’ at Waimate, 1960. He is just lifting the inside rear wheel.

Allan Dick meets Cliff Knight who, as a young man, spent much of the summer of 1960 competing around New Zealand in a Standard Ten.

Some things just stick in your mind. And a fellow who raced a black Standard Ten in the saloon car races through the 1960 season is one of those things that has stuck in mine – and not only in my mind, but it’s also something that the few remaining mates who are still vertical from that era also remember.
Why?
Well, because it seemed such an ordinary car and the bloke driving it seemed to be having an incredible amount of fun, weekend after weekend, even though it was totally unglamorous and he was hardly a front runner. He was doing what we dreamed of doing, but somehow lacked the commitment.
Over the years, Cliff Knight and his black Standard Ten have become a distant symbol of what motor racing was like back then when compared to today. The car was modified for racing, but it was driven on the road not only between race meetings, but also used as daily transport.

To the Races
By 1960, motor racing had a firm grip on my senses, a flame that had been ignited two years before when my mates had to talk me into a trip from Dunedin to Invercargill for “the car racing”. I had been to the opening meeting at Teretonga in late 1957 with the same crew of would-be bodgies and cardboard cut-out Milk Bar Cowboys, but I had been bored almost to tears.
And I had been present, in body if not so much in mind, at the 1958 Dunedin Road Race the week before this second meeting at Teretonga, but again, I was less than impressed. So, I was a bit of a reluctant team member when myself and five others crammed into Walter Powell’s rotten old 1938 Ford V8. To be honest, I was the team driver and it was the thought of driving this particularly vicious, brakeless, bald-tyred youth-killer that appealed to me far more than watching car racing.
It was meant to be a there-and-back one-day trip, but I had just had the diff out of the rotten old Ford and while I was under there, I added the rortiness of a ‘twin pipe’ exhaust system. Twin pipe? Well, it was all smoke and mirrors. In reality it had a standard Ford V8 system back to where the main muffler used be, and from there it branched out into two pipes of ridiculously small diameter as I had pilfered the system off a mate who had them fitted to his Morris Eight sport tourer. At least the small diameter pipes acted as a sort of restrictor, or muffler, and kept the sound levels legal while still magnifying that seductive exhaust note.
Car owner Walter didn’t know a screwdriver from a pair of vice-grips, but I did – so I was also the team mechanic.
On the outskirts of Invercargill I went around a corner a bit too fast and the body slipped over – and stayed there! We got out and looked underneath and I immediately realised I had not located the transverse spring retainer when I put the diff back in, so the body was free to slip and slide from side to side.
I was all for fixing it on the spot as I had brought along my old ex-US Army ammunition box full of plough spanners, vice-grips, a selection of hammers and a coil of farm lacing wire, which was my ‘fall back’ repair kit. But my travel mates were busting a gut to get to the car racing, so we decided to stay somewhere in Invercargill that night where I could get the body level and then firmly locate the rear spring while the rest looked on.
Well, the ‘somewhere to stay the night’ turned out to be a quiet corner of the botanic gardens, where we were completely undisturbed all night.
But between the emergency stop to see what was wrong with the car and our night in the gardens, something happened. I don’t know why, but we drove out of Teretonga that afternoon with the other five in the car all a bit unfussed about the day’s racing and me a raving fanatic. I became totally hooked on motor racing that day and I still don’t know why.
And because of that day, I remember that black Standard Ten as clearly as yesterday.
So, now we fast forward to the 1960 season, which is what this story is really all about.

Continue this story in our July-August issue (page 76-82)