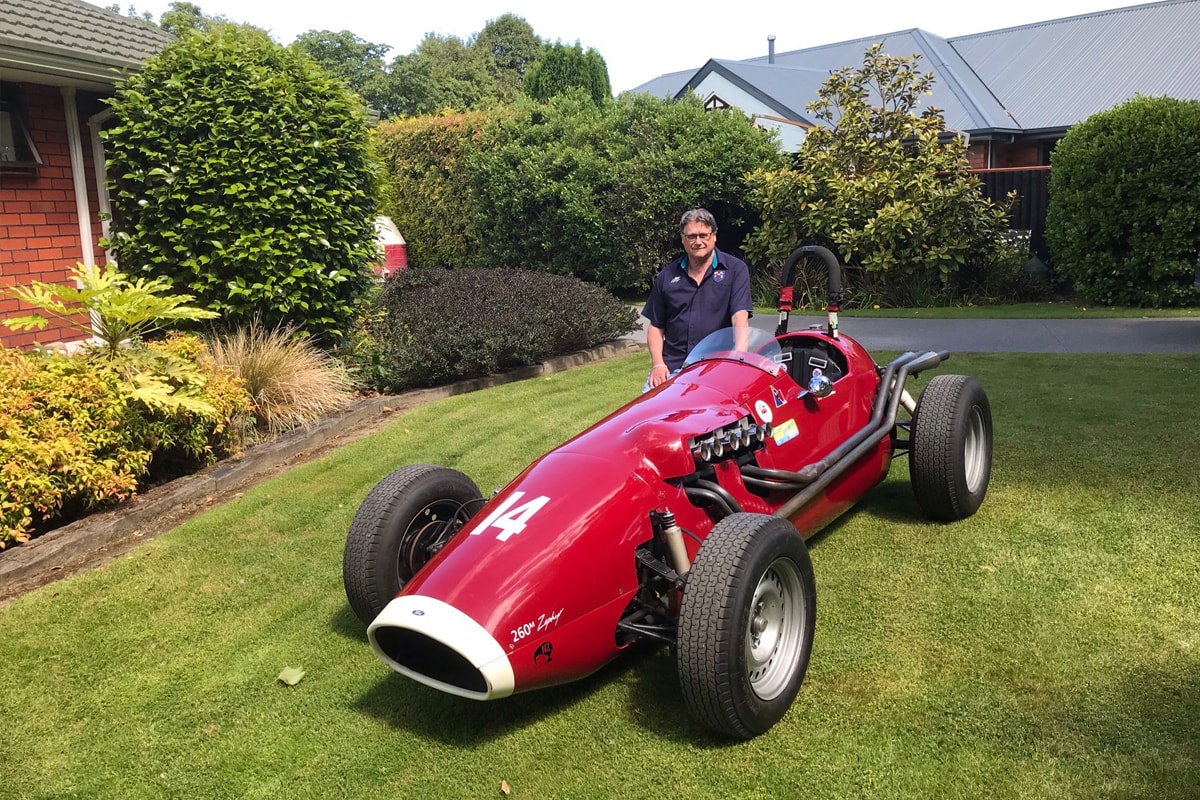 Mark McFadden and his 260M Zephyr.

After World War 2, when the importation of vehicles into New Zealand for most was not possible, the aspirations of local racing car builders took hold. It was a time that gave rise to our country’s reputation for producing a unique breed of can-do people that has seen subsequent generations fit into key positions within the international motor racing scene.

These pioneers all had a considerable degree of enterprise, determination, mechanical know-how and, indeed, bravery. New Zealand motor racing history has thankfully recorded these people kindly and, with the name McLaren still to the fore on the world scene, those of journalistic influence cannot forget or under-rate the roots set in place by Bruce McLaren and his home-grown team.
One of the locally built racing cars dating from that early era is the 1949 260M Zephyr. Along with the many other specials built around this time, the 260M has only occasionally ventured away from the South Island circuits.
Christchurch’s Mark McFadden has owned this historic car for the past 20 years and it has continued to be raced at the South Island classic meetings. Arguably only the Lycoming Special can claim a higher profile and record of success, along with other possible contenders such as the GeeCeeEss and Edelbrock specials.

Origins
The 260M, originally built by noted local constructor Hec Green, came out of his workshop as the RA2. Green built five cars, the last being the RA5 that he raced with some success. This final model is widely regarded as the best looking of his cars.
Green built RA2 for noted Christchurch driver Pat Hoare. It was based on a Fiat 500 chassis modified to a single-seater form and fitted with a 972cc Singer engine originally fitted to Hoare’s Singer Le Mans roadster, a machine that had been successful in pre-war racing in Canterbury. Engine power was transferred through a unique chain drive system to an Austin 8 axle. However, the Singer engine was not to Hoare’s liking in the new set-up and, predictably, the Singer motor was quickly replaced with a more powerful supercharged 1422cc Vauxhall engine.
In this form, Hoare raced the car for five years but with only limited success. Perhaps sixth places at Ohakea in 1950 and Wigram in 1951 were his best results. Of course, Hoare later became known nationally for his exploits in one of very few privately owned Ferraris, subsequently wining the 1962 New Zealand Gold Star championship.
The car passed to Christchurch’s Ron Rutherford in 1956 after Hoare, frustrated over his lack of success, sold it to Max Winterbourn. Rutherford’s time with the car would span nine years and he would race it for several years in its as-purchased condition before embarking on a major rebuild. This involved fitting a 2.6-litre Zephyr 6 engine complete with a Raymond Mays aluminium cylinder head and a stylish 250F Maserati (a car that had always been a favourite for Ron) lookalike body. The single-seater’s colour was changed from blue to red. The car’s name was initially changed to RA Zephyr before a final change to 260M Zephyr – 260 denoting the car’s 2.6-litre engine, with the ‘M’ standing for Raymond Mays. In Rutherford’s hands, the revised car would become probably one of the most consistent of all the specials. Success included wins at Waimate on three occasions, two-time victories at Timaru and Ruapuna, and the national beach racing title at Nelson.
Mike Stephens bought the car in 1965 and recorded second in the PDL Trophy for New Zealand-built specials at Ruapuna. Allan Rhodes followed and won the 1967 New Zealand beach racing championship at Nelson. In 1972, Peter Leversedge borrowed the car for the national beach racing title, finishing second. David Reid, who bought the car in 1969, suffered a major crash at Wellington in 1988.
Following this, Reid sold the car to its present owner, Mark McFadden, in 2001.

The McFaddens and Wigram
Mark’s motor racing background is firmly attached to the Motor Racing Club in Christchurch. This group was set up to run annual racing at Wigram in 1951 following the Canterbury Car Club’s decision to quit the promotion of these races.
Mark’s father, Murray McFadden, was a pilot with New Zealand’s National Airways Corporation (NAC) – the forerunner to Air New Zealand – with an intense interest in all things mechanical. He joined the Motor Racing Club in the mid 1950s. His involvement was similar to that of others who joined this club – and it was a real ‘hands on’ experience, especially during the annual weekend of racing at Wigram. Murray also wrote the official history of the club (Wigram Motor Racing), a book that was printed in 1996 after Wigram’s gates were shut to racing in 1994.
With his long involvement with the club, it is not surprising to learn that Murray’s son, Mark, was brought up with motor racing activities as very much part of his life: “As kids we were at Wigram every year, and as we grew older our jobs increased,” said Mark.
In later years Mark spent time at Ruapuna, where a friendship with Phil Mauger included crewing for his racing ventures. This initially involved work on an Austin single-seater special followed with the Stanton Cropduster, the Begg 018 and the ex-Denny Hulme McLaren M23.

A New Era
In 2001, during a visit to Fazazz, The Motorist’s Shop in Christchurch specialising in motor racing memorabilia and classic vehicle sales, Mark admired the 260M that was on the shop floor with a ‘for sale’ sign on it.
“Phil [Mauger] was with me and I said, if I ever wanted a car to race it would be that,” said Mark. “The car then sat around Fazazz for another 12 months or so and one day Phil said to me, more or less – ‘let’s buy this car now’. We did exactly that, I paid him back his contribution within six months and I set about planning a racing future.”
Mark has been the owner and driver of this historic special ever since. After being out of action for some time the car needed a tidy up, but since then he has missed few South Island classic meetings. In recent times, this has not included hillclimbs, although when he first bought the car the annual Gebbies Pass hillclimb was Mark’s first outing in the 260M.
“This was a baptism by fire really, there are some big drops on that road, so there was some scary stuff!”
Mark also competed on a couple of the Dunedin hillclimbs before settling on just following a circuit-racing programme. Despite Ron Rutherford having started on gravel hillclimbs, competing on shingle was never a real possibility for Mark.
When Mark was filling in the forms for Motorsport New Zealand’s Certificate of Description, the question of whether the car was original posed a brain-teaser.
“It wasn’t original after day one probably, and certainly not after Ron had made changes. I guess it is as original as it can be though.”

Racing History
Mark regards Teretonga as his favourite track, and he held the circuit’s Vintage Car Club of New Zealand lap record at 1.15.87 for two years. This came at the time when the VCCNZ gained independent racing status from Motorsport New Zealand.
His quickest lap around Ruapuna is 1.48.47, a time that is considered decent enough, although Mark reckons he isn’t as aggressive as he used to be in his younger days with the car. Reflecting on the day that Avon Hyde drove the car, Mark said, “We all know that Avon is a good driver and I was really keen for him to put the car through its paces. He was doing the same times as me within six laps!”

Involvement with the VCCNZ racing register via the Banks Peninsula branch has seen Mark also assist in promoting the Grand Prix Specials Team (NZGPS) – for the benefit of younger generations of motor racing fans who weren’t around during New Zealand’s golden age of motor racing, all the cars carrying the NZGPS badge are front-engined, could have competed in the New Zealand Grand Prix, and have been built by New Zealand enthusiasts in their own garages or workshops.
The 260M, with its original set-up and known as the RA2, finished sixth with Pat Hoare in the first New Zealand Grand Prix raced at the Ohakea airfield circuit in 1950. The field for that race also included George Smith in the Ford-powered GeeCeeEss Special.
In the current era of NZGPS cars competing at classic meetings in the south, the 260M has often been joined by other home-built cars such as the Ace III, the Edelbrock Special, the GeeCeeEss Special, the Stanton Corvette and Cropduster, two Stuart Specials, the Citroën Spyder, and the Lycoming Special.
The 260M Zephyr remains in great shape, and apart from being attended to by Mark, others who have ensured that it has been kept in this state include Graeme Hamilton (who owns the Ace III) and Noel Atley (a well-known competitor from Southland). Sadly for Mark, the 260M is now for sale.
“I would like to see it go to a good home and that whoever gets to be the curator of it has as much enjoyment as I have had over the last 20 years. Get excited! This is only the second time the 260M has been for sale in 48 years. It is in excellent order and ready to race with many spares.”
For the large contingent of enthusiasts who dote over the appearance of the VCCNZ cars, it is hoped that the 260M’s eventual new owner will be a New Zealand resident and someone who will continue to pursue on-track activity.