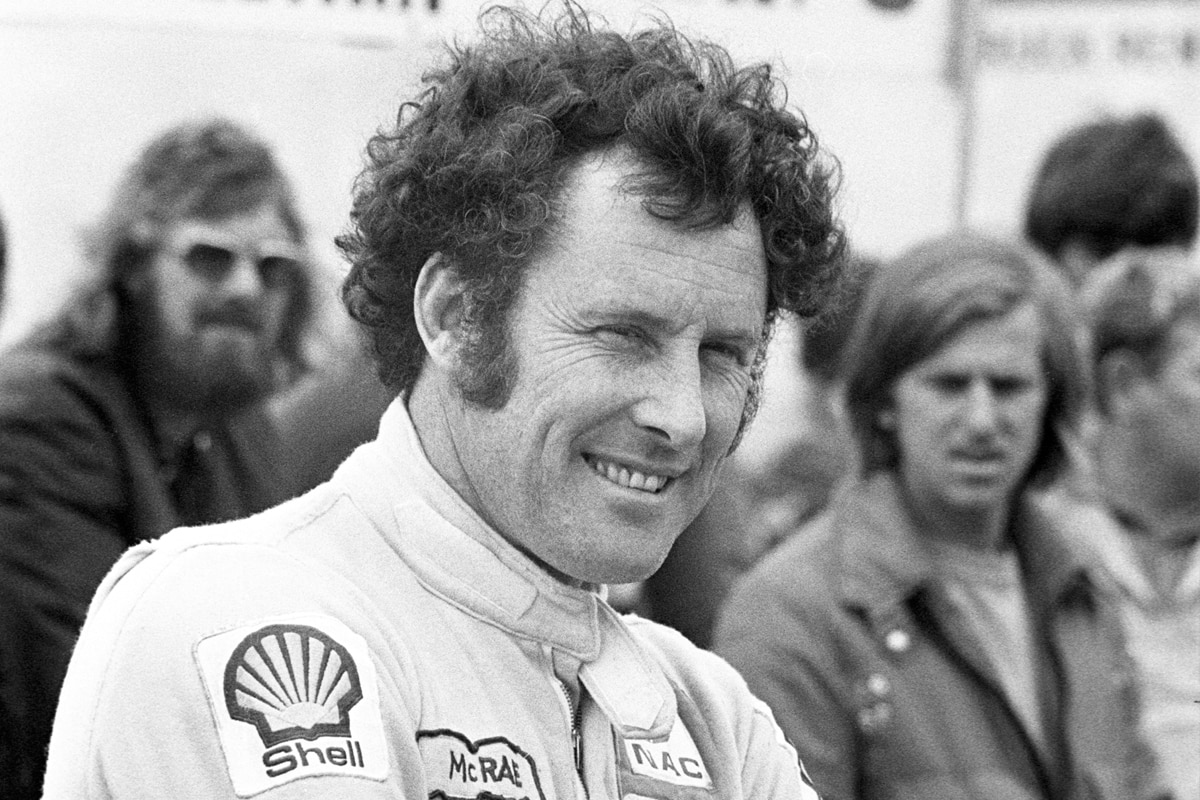 We are born. We live. We die. What we do with the years between is our choice. Some waste their years. Others achieve greatness. Graham McRae achieved greatness.
Wellington-born, he became a highly talented engineer and motor racing enthusiast, building his own cars – the earliest being the Maserarri, a sports car that achieved most success with an Austin A70 engine. Levin was his stomping ground and he became a master of the demanding little track. The Maserarri was followed by another sports car based on the British U2.
Both cars were noted for a remarkably high build quality – the U2 still exists and is a regular competitor in classic racing.
But, at 27 years of age, McRae set his sights higher – he bought a Brabham single-seater with a mildly interesting history, having been once owned by Roy James, one of the Great Train Robbers.
It was the oldest Brabham still competing, and McRae’s name was not well-known outside the immediate Wellington area.
But that was to change.
He didn’t win races but his aggressive and precise style of driving placed the Brabham higher than it deserved to be, and people noticed.
Over the winter of 1968, in Miramar, he built his own car using the engine, transmission and some suspension parts from the old Brabham. However, it was smaller, narrower and lighter than the old car and was clothed in a pretty body that, with its swept-up scuttle, had hints of the Ferrari that Chris Amon had campaigned in the Tasman Series earlier that year.
This was the car that rocketed McRae to stardom. It was obvious the car was fast, handled beautifully and was driven superbly, and within two meetings McRae was knocking off established stars like Ken Smith and David Oxton with ease.
However, it was the 1969 Tasman Series round at Levin where he put on a master class, getting among the international drivers to finish a stunning sixth.
His performance over that 1968–1969 season, and particularly at Levin, prompted motorsports administrators to revive the lapsed ‘Driver to Europe’ scheme that had earlier launched the careers of Bruce McLaren and Denis Hulme.
McRae sold the little red McRae Twin Cam that carried the number 36, purchased the tired old F2 Brabham BT23 FVA that Laurence Brownlie had leased for the Tasman Series, and headed for Europe.
The Brabham was a tired old nail, but New Zealand and Australia were on the verge of adopting American Formula A, which had already been taken on by Britain and Europe and renamed F5000. McRae was destined to become the most important person of the F5000 era.
One of the first racing car manufacturers to produce a car specifically for the formula was McLaren, with the M10A.
In New Zealand, old motor racing chums whispered to each other and the upshot was that former racer Sir Tom Clark, head of Ceramco/Crown Lynn, acquired an M10A for McRae.
He didn’t win the 1970 Tasman Series due to reliability issues with the car, but in 1971 his McRae-modified M10B cleaned up.
That season saw plenty of needle between McRae and his equally ebullient Australian counterpart Frank Matich. McRae oozed a cocky confidence – to the point where a deadly serious Matich finally quipped, “He’s just like Cassius Clay, the boxer.” The name stuck and was embraced with McRae’s own small team so much that the pit-boards the team used had ‘Cassius’ at the top, rather than ‘McRae’.
By now, McRae’s career was in top gear and his star was definitely on the rise.
With some fresh financial backing he built his own car, the McRae GM1, with which he won the 1972 and 1973 Tasman Series and the 1972 L+M Series in the USA. The GM1 became a significant customer car and today is popular in historic F5000 racing around the world.
In 1972 he was offered a one-off drive in Formula One by the Tyrell team, which he couldn’t accept because of his busy schedule. The next year, though, he accepted a Formula One drive with Williams in the British GP, but it was short-lived – less than a lap.
Showing how high his profile was, in 1973 he also drove an Eagle in the Indianapolis 500, finishing 16th in a rain-shortened race, but he was named Rookie of the Year.
From that point on, his career went into a long, slow decline. The cars he designed and built after GM1 didn’t quite click, and although he was recognised as a star driver and a star designer/engineer, major offers didn’t come.
After his racing career finally petered out, he spent some years in the USA before returning to New Zealand virtually unnoticed, where he began building replica Porsches before illness took control and dominated the rest of his life.
I wanted to write his story – not just an expansion on what you read above, but the untold stories that you would only have got by sitting down with him.
My everlasting memory of Graham is a sad one. Around 1992 when I heard he was back in New Zealand, I walked into the empty shop in Auckland where he was working and living, and we were delighted to see each other again after so many years. His entire world was bundled up in a large shipping crate, including all of the trophies and sashes he had won, leaving me to wonder at the successes and the opportunities lost.
Graham McRae was a tortured genius who is now at peace.