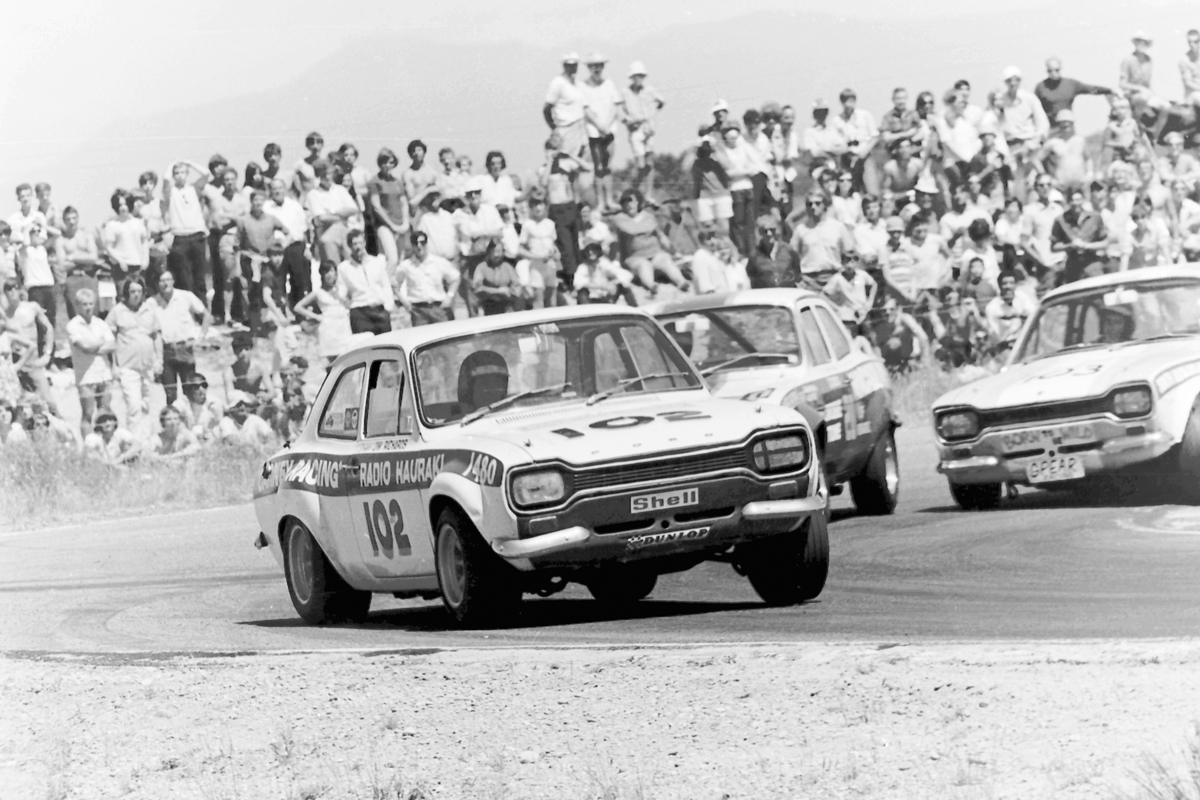 Jim Richards is one of New Zealand’s most successful racing drivers and the list of significant cars he has driven is extensive, but the car that put him on the map was this glorious Ford Escort Twin Cam, originally built and campaigned in the British Saloon Car Championship by the John Willment Group.

Jim Richards’ list of achievements includes winning Bathurst seven times and winning the Australian Touring Car Championship (now the V8 Supercars Championship) four times, as well as the New Zealand Saloon Car Championship in 1974. However, he began his racing career at the age of 16 in a humble Ford Anglia.
It was his own car and doubled as his daily transportation. Being a young motor mechanic, he was limited by a very limited budget. In 1968, he purchased a Ford Escort, albeit one equipped with the wheezy 1300cc engine. But this was to be an important car for him.
Despite these self-imposed limitations, Richards’ talents were soon noticed by businessman and enthusiast racer Jim Carney. Carney had just acquired one of New Zealand’s first Escort Twin Cams, an example that was purely a street car but, regardless, it was a far superior machine to that being raced by Richards. Carney raced the Twin Cam himself, but he offered the seat to Richards late in the season. The transformation was immediate.
Enthused, Carney wanted to take his pet project a step further.
At that time the New Zealand Saloon Car Championship was contested to FIA Group 5 regulations, the same as those being used for the British Saloon Car Championship (BSCC)and European Touring Car Championship. A squad of Ford-supported teams in Britain began racing pure competition versions of the Escort Twin Cam in late 1968, replacing the Lotus Cortina MkII. These included Alan Mann Racing (AMR), Broadspeed and the John Willment Group. These teams were represented in three of the four BSCC categories, which, as in New Zealand, was based on engine size: Broadspeed contested Class B (1000–1300cc), Willment Racing
ran Class C (1301–1600cc) and Alan Mann Racing was in Class D. Even though the AMR Escorts were powered by 1594cc engines, they used 16-valve FVA Formula 2 engines. This placed them in the fastest category against V8 machinery.
Although talented and adaptable Kiwis are capable of building highly successful racing cars, during the early years of Group 5 the preference was always to purchase an existing car that was developed and proven internationally – and if it was a factory car, well that was even better.

Willment Escort
In 1969, Carney arranged to purchase the Willment Racing Escort for Richards, who would contest the 4.2 class. This particular car had been driven throughout the 1969 BSCC season by Mike Crabtree, who won the fiercely contested Class C championship. From 14 starts, Crabtree won six Class C races, and was second on three occasions. His best outright results were third placings in Round 2 at Silverstone and Round 10 at Oulton Park. The Willment machine was clearly very capable.

The Willment Escort featured a special lightened bodyshell that included lightweight panels and glass. The roof was braced to add rigidity (it didn’t have a roll-cage), and while it was fitted with the homologated Forest flares, the rear inner guards were also tubbed for extra fat wheels and tyres. It ran a compression strut front-end, with Satchel link coil-over rear suspension and adjustable shocks. Front brakes were disc, with drums in the rear. The feisty little twin-cam engine was built by Racing Services to produce around 126kW (170bhp) and included a dry-sump system, backed by a Ford competition five-speed gearbox.
With the BSCC concluding at Brands Hatch on October 19, Richards was going to miss the opening rounds of the 1970 New Zealand Saloon Car Championship, which kicked off just a few weeks late.

Kiwi Debut
The Willment Escort made its New Zealand debut at Baypark on December 28, 1969. Indeed, there was so little time between its arrival in New Zealand, and the Baypark event, the car still carried John Willment Group signage on its rear quarters.
Having missed the first four rounds of the championship, Richards immediately showed he’d be a threat, not only in the 4.2 class but even against the big-banger cars in the 5.5 division. In the combined qualifying session, Richards recorded an impressive best lap of 1:05.2s, which was good enough for fourth outright, and headed only by the Camaro of Rod Coppins and the two Mustangs of Red Dawson and John Riley. Indeed, he was 0.3s faster than Paul Fahey in his newly acquired Alan Mann Racing Escort, which contested the 5.5 class due to its FVA Formula 2 powerplant. Furthermore, he was three seconds faster than the next 4.2 class car; Gary Sprague’s Escort Twin Cam.
Richards then won on debut in the 4.2 race, pulling away from Sprague, while Rodger Anderson moved up to third in his BMW 2002. He was sensational, underlining the faith Carney had placed in him. The dream debut was brief, however. The Willment machine began to slow towards the end of the five-lap contest, and a post-race inspection discovered a crack in the engine block.

Richards missed the next round of the championship, held at Levin on January 3, 1970, as engine repairs were being carried out, but returned for the New Zealand Grand Prix event at Pukekohe one week later. He was sizzling in qualifying, recording the third fastest time outright, and beaten only by Coppins and Fahey.
In the 4.2 race, he surged away from the chasing pack, leaving Anderson and Sprague to squabble over second. In the combined race, Richards ran fourth, chasing Coppins, Dawson and Riley, but headed the 5.5 class cars of Clyde Collins (Falcon) and Fahey. Although Collins and Fahey moved ahead, Collins would spin, and Fahey dropped out with fuel-injection problems. And when Dawson retired with an overheating engine, Richards ultimately scored an excellent third place.
The team opted not to follow the Tasman Series to Wigram and Teretonga, as neither event hosted championship races, nor did the following event at Levels. The next championship race was held at Pukekohe on March 8, and Richards equalled the 4.2 class record in qualifying, recording a 1:12.5s to be fourth outright and first in 4.2. In the 4.2 race, Anderson jumped ahead and stayed there until lap three, when Richards went by, although Anderson stayed close, and was comfortably ahead of Jack Nazer (Escort Twin Cam).
Anderson was a non-starter in the second race, leaving Richards to win as he pleased, from John Weston (Mini Cooper 1275S) and Don Halliday (Escort Twin Cam).

In the 5.5 race, Richards spun away his strong qualifying spot on the first lap, with rain falling prior to the start. He dropped to thirteenth, but then began a remarkable comeback; an early indication of his supreme talent on a wet track. One by one he picked cars off, until he was fourth by lap five. This became third when Coppins and Fahey banged into each other and the Alan Mann Escort speared off into the fence. And when Anderson’s BMW began to slow with an overheating engine, Richards moved up to finally finish second. In the second 5.5 race, He chased leader Coppins throughout, finishing just one second behind at the end.
The dramatic Baypark Easter event on March 29 was next, which featured Australian racer Terry Allan and his big-block Camaro. Against a star-studded field, Richards qualified a staggering fourth outright, headed only by Allan, Coppins and Riley. Grady Thomson (Monaro) displaced him early in the first race, but the Escort driver finished where he started when Allan retired. In the second heat he battled Riley for third, chasing Allan and Coppins, but the Mustang eventually prevailed. In heat three, Thomson also managed to slip by in the Monaro. But Richards had impressed all by challenging the big-bangers in his 4.2 class car.
In the next event at Pukekohe, Richards qualified fifth outright and first in the 4.2 class, this time heading Anderson’s BMW by just 2-tenths. He then won the 4.2 race, and finished second to Coppins in the 5.5 contest after both Fahey and Riley spun down the field. He also finished second to Coppins in the non-championship Dunlop Half-Hour feature.
The final round of the 1970 championship was held at Levin on April 18, and despite missing the early part of the season, Richards still had a shot at winning the 4.2 title. He qualified fourth outright and first in 4.2. Anderson led Richards and Sprague in the 4.2 race, but Sprague’s hopes ended on lap 3 when he pitted with a flat tyre. Richards and Anderson then swapped the lead several times, but it was the BMW driver who was in front when it mattered, with Anderson emerging as champion. The Escort slowed towards the end when a connecting rod broke.

A Successful Season
Richards and the Escort returned for another crack at the 1971 championship, and while the competition was increased, Richards proved supreme. His biggest rival this season was Don Halliday, in his self-built Escort Twin Cam. Jim Palmer had leased the Porsche 911 raced in the 1970 Australian Touring Car Championship by Brian Foley, but the Porsche was ultimately deemed ineligible. Indeed, this was to be a hugely successful season for Richards, as he won all the 4.2 races, finishing 14 points clear of Halliday to win his first national title. He also placed fifth in the 5.5 championship, and then drove Brian Patrick’s Hillman Imp to third in the 0-1000cc baby class against an army of Mini Coopers.
For the 1972 championship, Jim Carney opted to take the final step and compete for outright wins. He duly placed a deposit with Ralph Broad for the latest British Ford pocket-rocket; a Broadspeed Escort RS1600, complete with 1700cc fuel-injected engine. Broadspeed driver John Fitzpatrick used the RS1600 to great effect, winning two races outright in 1971, beating the much fancied V8s. This was truly a faster and better car than the now-ageing Willment machine. The RS1600 would be shipped to New Zealand as soon as its BSCC commitments were complete.
In the final round of the championship, however, Fitzpatrick and Camaro driver Frank Gardner crashed heavily while fighting for the lead, and although repairable, the damage to the Escort was significant enough that Richards would miss the start of the New Zealand championship, thus defeating the motivation for purchasing the car in the first place.
Richards, therefore, continued for a third season with the Willment Escort. But the competition had progressed significantly. The Halliday brothers had now installed a BDA engine in their Escort, and while Richards fought valiantly against Don Halliday, ultimately, he came up short.

The End of a Partnership
Having failed to secure the Broadspeed RS1600, Jim Carney opted to sell the Willment Escort in 1972, ending his successful partnership with Richards.
The Escort had put the youngster on the national motorsport map, scoring countless guest drives as a result. He’d also made some important connections, one of which was Stuart Innes at Sidchrome Tools. Sidchrome had sponsored the Patrick Imp that Richards had driven with such vigour, and Innes agreed a sponsorship arrangement with Richards to build a 1969 Boss 302 Mustang and contest the outright division. This ultimately led to him winning the 1974 New Zealand Saloon Car Championship, before Richards took the car to Australia in 1975, where he began carving out a successful career.
The Willment Escort, meanwhile, was sold to Lindsay Neilson, who campaigned it with further success. In 1990, Rayden Smith purchased the Escort off Gavin Handley, who’d just installed a 13B Mazda rotary engine for OSCA racing. Smith carried out light restoration work, fitted a BDA with a five-speed ZF gearbox, and has raced it extensively ever since. Recently, it was sign-written in its 1969 BSCC guise, and as it first appeared in New Zealand, with John Willment Group lettering along the rear flanks.
Being a Ford factory-supported car with BSCC history, and a highly successful one at that, the Willment Escort Twin Cam is both exceedingly rare and now very valuable. That it has remained in New Zealand and continues to be raced, given its value and rarity, is a testament to its present owner, Rayden Smith.