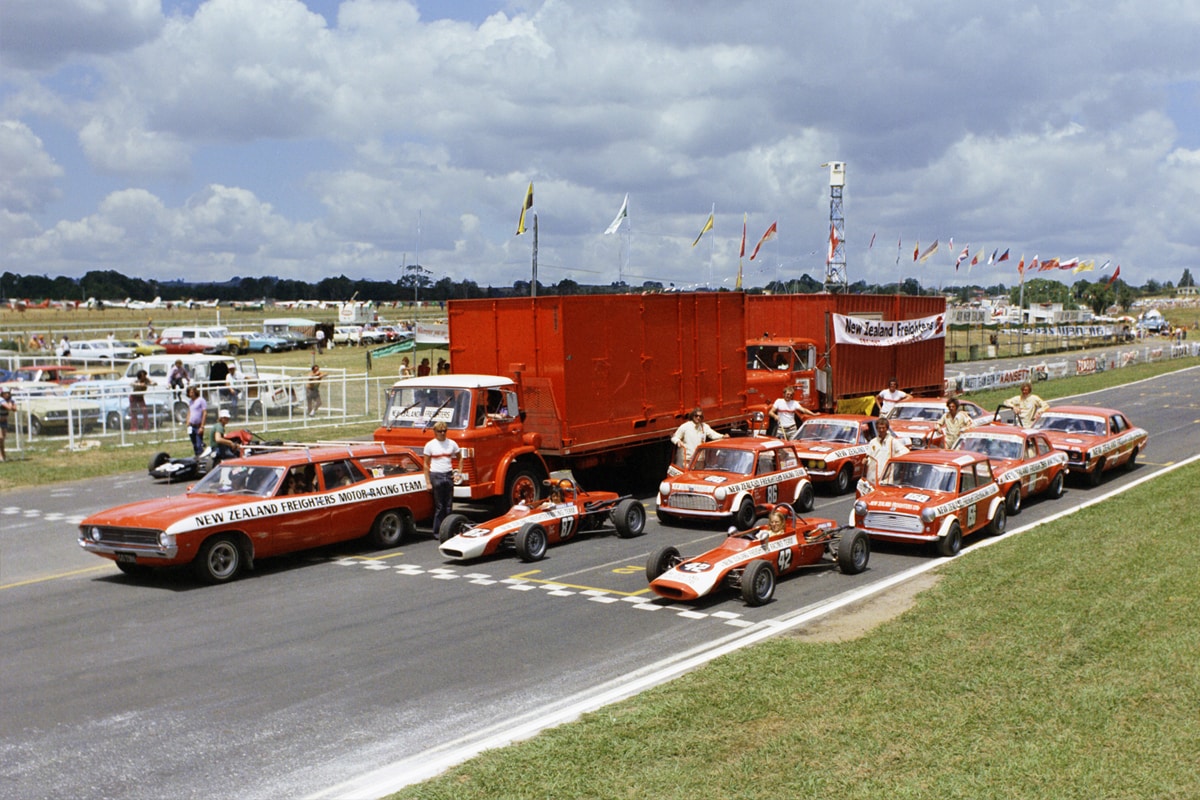 The New Zealand Freighters Racing Team lined up on the Pukekohe starting grid with Barry’s tow-car wagon in the background (Photo Jack Inwood).

Kevin concludes his look back at the motorsport career of Barry Phillips.

After two seasons of the Cambridge Racing Team, Rothmans decided to change brands so a new team was set up under Winfield colours, although with reduced driver numbers – David Oxton in both the Formula Ford and Begg FM4 F5000 car, Rod Coppins in the Chevrolet Camaro then the Pontiac Firebird, and Barry again in the Mini-Cooper S. With the new team came the addition of John Dale, who took over mechanical preparation of the fuel-injected Mini.
One of the races which most drivers recall was the classic final round of the 1972 season at Pukekohe when they used the original long circuit, including the notorious ‘Elbow’ – the first corner at that circuit. The race-long four-way battle between Phillips, Jim Richards, Reg Cook and Rod Collingwood was monumental and had the large crowd literally on their feet. Victory went to Richards, with Collingwood winning the championship, but all four drivers took spells at leading at some point. The Winfield Team wound up at the end of that season as Rothmans withdrew from racing team sponsorship and, after selling his car to fellow Mini racer Wal Wymer, Barry purchased the Mary Carney Arden car and raced the 1973 season self-sponsored in Cambridge-like livery.

A New Team
Between racing seasons, Barry received a phone call that was to prove very influential to his racing career. The call was from Bruce Lindeman, a Napier-based businessman who stunned fellow car enthusiasts by importing a brand new Ferrari Daytona when there were no other road-going Ferraris in the country. In fact, he was at that time the Ferrari representative in New Zealand.
“Bruce was a hell of a nice guy and invited me to Napier for a meeting so we took a plane down with air fares paid for. He said he wanted me to set up and manage a new racing team, which was to run in different classes,” Barry explains.
What eventuated was the New Zealand Freighters Racing Team, later renamed the Brambles New Zealand Freighters Racing Team – with Barry still at the helm. Over the next few seasons, drivers would include newer names on the racing scene such as Jim Murdoch and Brett Riley (Begg Formula Ford JM1), Don Halliday (Escort BDA), Rex Hart (Mini-Cooper and Escort FVA) and Jack Nazer (Victor-Chev). Other drivers added included Rod Coppins, Roy Harrington and Bryan Innes in a variety of saloon cars.
As with the Rothmans teams previously, the Phillips team were looking smart with a Falcon station wagon painted in team colours as a tow car, and the decision was made to move up to the new 0–1300cc class. Barry purchased the ex-Mary Carney Arden Mini-Cooper, with a bigger engine fitted for the first season, and finished in New Zealand Freighters Racing Team colours. However, for the second season under the Brambles New Zealand Freighters Racing Team, he acquired the ex-Rex Hart 0–1000cc championship-winning Mini-Cooper with a similar bigger engine installed. Not only did he contest the 0–1300cc class both seasons but he also competed in the bigger 0–4200cc class, which more than raised a few eyebrows.
Racing in the 0–1300cc category was cutthroat to say the least, as Phillips was up against Reg Cook’s Datsun Sunny, Bill Leckie’s big-engined Hillman Imp and Jim Stone’s rapid Escort Twin Cam, among others capable of taking out race victories. All drivers shared race wins over that season, with Barry’s championship class placing being second overall – and surprisingly, he also managed to finish the 0–4200cc fourth overall on points.

Continue this story in our September-October issue (page 60-68)